The San Diego Region A Special Place, Built by People Focused on the Future

The timeline represented here is an interactive data visualization tool that reflects the San Diego region’s economy through the ages using historical data from various sources.

The history of San Diego is one of ambition, innovation, and reinvention. Humans have inhabited this corner of the North American continent for millennia, drawn to its temperate weather, spectacular coastline, and abundant natural resources. More than a century ago, new settlers imagined this place as a vacation paradise, an anchor for America’s young Navy, and a center of 20th century culture, education, and expanding technological horizons. Along the way, people with an eye on the region’s future – civic leaders, businesspeople, philanthropists, and everyday citizens – built San Diego by investing in visions of what our region could be. As we trace the contours of San Diego history in this interactive timeline, we are reminded that it’s our turn, today, to shape our region’s future. Our vision, and our commitment to those who come after us, will write the next chapter in San Diego’s history.

Learn about 6 major stories that helped shape the history of the San Diego region.Timeline StoriesThis document opens in a new tab

Download all timeline data to an excel fileDownload All Data

The Region’s First Inhabitants
Our region's first inhabitants have lived here for at least 10,000 years. Four of the most prominent Native American groups, the Kumeyaay, Cupeño, Cahuilla, and Luiseño, have survived centuries and colonization, displacement, and persecution and today assert sovereign authority over 18 Indian reservations and a $1 billion gaming industry that has created more than 10,000 jobs.
The U.S. Navy Drops Anchor In San Diego
More than 100 years ago, city leaders had the foresight and determination to persuade the U.S. Navy to make San Diego Bay a base of operations. Today, San Diego is the Navy's most strategic port, $33 billion in direct spending is related to defense (as of FY 2020), and the military accounts for nearly one in four jobs in the region.
Creating a Vacation Wonderland
Our region's modern tourism industry arguably began in 1915, when the Panama-Pacific International Exposition attracted people from across the nation. Today our region, with its spectacular coastline, dynamic cities, and numerous family attractions, is a world-class vacation destination.
Philanthropy and Civic Investment
Individuals throughout our region's history have donated their time, energy, and personal resources to make our home a better place to live. Some of our most beloved cultural institutions, hospitals, nature preserves, academic research centers, city parks, and more have been made possible by the generosity of people with an eye on our region's future.
Building a Post-War Economy – Education and Tech
In the wake of World War II, our region's leaders planned for a new post-war economy built on academic opportunity and research & development in science and engineering. The establishment of UC San Diego and its surrounding research community, and other centers of learning and research, have injected billions of dollars into the regional economy and created tens of thousands of jobs in biotechnology, computer science, engineering, and other fields.
Environmental Protection
With rapid economic growth in the second half of the 20th century, new stresses on the region's natural environment demanded action. The 1990s saw new concerted efforts by regional and local governments to protect valuable coastal habitats and natural landscapes inland, and guide development more intelligently.

Civic
This category tracks civic milestones among 18 municipalities and the county government in the San Diego region.
Transportation
A historic look at the evolution of transportation in the San Diego region.
Tourism
The San Diego region's scenic geography and cultural history make it one of the most popular tourist destinations in the world. About 10% of the jobs in our region are tied to tourism.
Innovation
San Diego's successful innovation economy is supported by UC San Diego, San Diego State University, the University of San Diego, and other institutions. More than 11% of the jobs in our region support the region's innovation economy.
Tribal Nations
The San Diego region is home to 18 Native American reservations represented by 17 tribal governments, the most in any county in the United States. There are more than 73,000 acres of tribal reservation lands in the region. As sovereign nations, tribal governments govern land use on their reservations and other land holdings. SANDAG and regional tribal governments work together to facilitate government-to-government planning and coordination on a variety of issues. Our region's tribal nations are a vital part of its history.
Military
San Diego’s location on the Pacific Ocean supports many military operations around the world. The region's military installations, which range in size and purpose, support 8.5% of the jobs in the region.
Binational
The San Diego region has strong ties with adjacent counties (Imperial County, Orange County, and Riverside County), the Republic of Mexico, and the 17 tribal governments. The region's neighbors are important contributors to the regional economy.
Our Environment
Over the past several decades, the San Diego region has taken concrete steps to protect the environment. These include efforts to protect our invaluable shoreline and natural habitats for plants and animals, replenish sand at our beaches, slow suburban sprawl by concentrating development in urban areas, promote alternative fuels and zero emission vehicles (ZEVs), make communities more resilient to the consequences of climate change, and better control stormwater runoff.
Education
The San Diego region has invested significantly in world-class institutions of higher learning, which have become engines of economic growth and centers of culture. The education sector currently accounts for 8.6% of jobs in the region.
Retail
Our region's shopping destinations are wildly popular with residents and tourists alike. They are also a major center of employment, contributing more than 14% of jobs regionwide.
Healthcare
Our region's healthcare heritage began with the opening of the San Diego County Hospital in 1904. Today healthcare is one of the most innovative economic sectors in the region, supporting nearly 12 percent of its jobs.
Manufacturing
Manufacturing has always played a significant role in our regional economy. During World War II, the region was a major player in aircraft manufacturing. In more recent years, defense, telecommunications, and biotechnology have been centers of manufacturing. Today, the sector accounts for 3.6% of jobs in the region.
Professional
The San Diego region has a growing professional workforce. Finance, insurance, real estate, and professional sectors currently account for 16.3% of jobs in the region.
Investing in Our Region
People with vision built our region. Here are highlights of key decisions related to our region's military heritage, tourism economy, world class universities, research laboratories, and more. Political leaders, business people, philanthropists, and everyday citizens have all contributed to our region's prosperity.
Population
In 1850, 798 people called the San Diego region home. In 2020, that number had grown to more than 3.3 million. As our region continues to grow, economic opportunity and prosperity for everyone will depend significantly on enhanced personal mobility, social equity, and a healthy environment.
Pre-ColonialThe Pre-Colonial era marked a time when Native American communities thrived. Evidence suggests that humans have lived in the region for at least 10,000 years. The ancestors of present-day Kumeyaay, Cupeño, Cahuilla, and Luiseño Native Americans developed rich communities that harvested food from the sea, managed chaparral on coastal hills, maintained oak groves in inland valleys, and cultivated food and other resources in the region's rugged deserts.
(10,000 years ago - 1541) 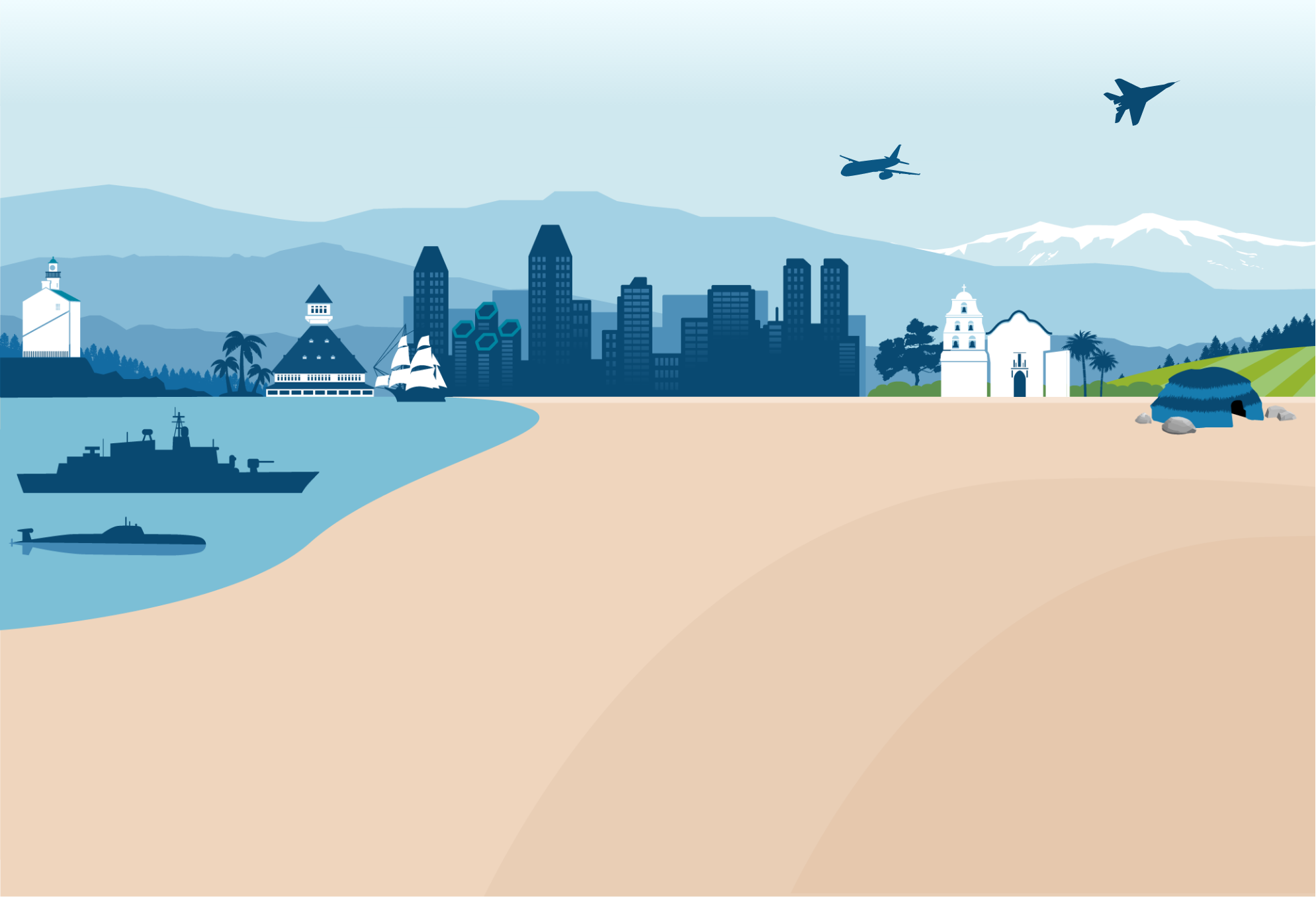 Disclaimer
SANDAG has used reasonable efforts to ensure that the data used in this tool is complete, accurate, and useful. However, because SANDAG does not create these data, we cannot be liable for omissions or inaccuracies.